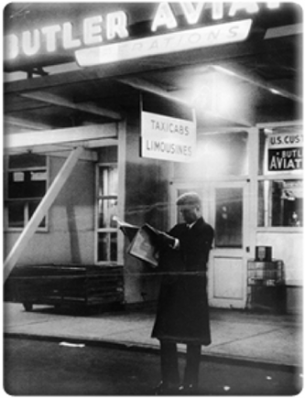 Making History since the 1940s

With a corporate history that traces back to the 1940s, Butler originally served the aviation industry exclusively. Chicago industrialist Paul Butler founded Butler in 1946. Recognizing a trend in aviation following World War II, Butler opened its doors at Midway Airport in the city of Chicago, at the time the busiest airport in the world. From then, the company went on to become the largest chain of FBOs in the world, covering the major cities of the US. During its history, Butler has supported the flight needs of many organizations and individuals, including US presidents, international government leaders, celebrities, major corporate executives, and airlines.

After recognizing other markets, the company quickly diversified, beginning with the 1964 purchase of International Transport, the largest oversize and overweight trucking company in the US. By the 1970s, Butler Service Group expanded its services technical services and additional value businesses. In 1968, the company was listed on the American Stock Exchange and later changed to NASDAQ in 1978. In 1987, Butler was sold to a US investment group.

The company continued its operations under the Butler America brand and retained much of the operational and on– the–ground talent from Butler International through the end of 2016.

Butler Today, Tomorrow and Beyond – Structured for Optimum Customer Service

In January 2017, Butler sold its Aerospace and Defense division to HCI Technologies.  The remaining portion of the company rebranded itself as Butler America Telecom LLC and plans to continue its existing telecommunications service offerings while strategically expanding its portfolio to best meet customer demand.

Butler America Telecom is constantly striving to update our portfolio so we can best serve our greatest asset… our customers.

Butler America Telecom operates out of 6 primary branch locations around the country.  The leaders of our branches have an average of 18 years with Butler and nearly 30 years of experience in the Telecom industry.

Butler America Telecom is passionate about quality.  Butler has invested in the creation of unique processes and procedures that produce quality and consistent performance which sets us apart from our competition.  Our Quality and On-Time Delivery metrics for engineering and installation services are at the top of the scale and exceeded by none.  Over the past 3 years: